Slim Spurling was born in Aberdeen, South Dakota in 1938 and moved to Colorado a few years later. As a child he already loved the country and the forest, working in the fields, fishing, and hunting.

Prior to college, he served as a Petty Officer Third Class in the Navy Air Reserve. During that time, he had a chance meeting with the navy commander at the base barbershop. He guessed that his reserve record and grades impressed the commander, because he wrote a letter exempting Slim from monthly reserve duties. This conversation turned out to be a significant episode in his life. The next month, while flying to Olathe, Kansas, all the reservists were killed when the flight went down in a storm. Incredibly, this tragic event occurred again the next month as a second flight went down. Slim was grief-stricken by the loss of his friends, and awed that for some reason, his life had been spared. For the first time, he had the realization that his destiny and purpose for being were guided by forces much larger than he could imagine.

His family also lived in harmony with nature. After his two-year career as a naval officer, he graduated from Colorado State University with a degree in natural sciences with a focus on forestry, botany with mycology (study of fungi) and chemistry.

Because of his excellent research, he was offered a scholarship for a three-year master’s degree to develop a special chemical substance. After reading the criteria this substance should meet, it was clear to him that the research was intended to manipulate the population. Deeply shaken and disgusted, he refused, refused to take his diploma, and turned his back on the scientific and academic community for a long time.

Slim developed a keen interest in metaphysics that was inspired from two near-deaths and an out-of-body experience.

From blacksmith to dowser
After leaving academia, Slim began a twenty-year career as a blacksmith. He founded and directed the largest blacksmithing school in the USA in the 1970s. This craft always remained of the greatest importance to him in everything he later did, and it also led him to his first encounter with alchemy. Not least because of this, all of the pieces of iron made by him have a very personal and inimitable signature.

He had first encountered dowsing as a young boy. His parents hired a dowser to find a suitable spot for a well. The dowser made Slim hold one end of the rod and Slim felt it move as they hit water. Many years later he remembered it and learned to dowse.

Slim began practicing the ancient art of dowsing in 1970 and created a very simple and inexpensive method of neutralizing Geopathic Stress and the Hartmann Grid. He was an internationally recognized expert in the art and was known for conducting seminars in the U.S., Canada, Europe, South America, and South Africa.

In 1985 he and his good friend Bill Reid began to explore the intricacies of alchemy and metaphysics. The research in subtle energy phenomena and technologies lead to the discovery of the first Light-Life® Ring in 1991. Further inventions based on this technology are the Acu-Vac Coil, the Feedback Loop, and the Harmonizer. These Light-Life Tools, which are room temperature super-conductors, produce positive subtle energy effects in areas as diverse as relieving discomfort, enhancing the body’s ability to heal itself, improving water quality, abating air pollution, certain types of insect control, and increased plant growth.

Teaching this method and using the Light-Life Tools was one of the foundations of his workshops. 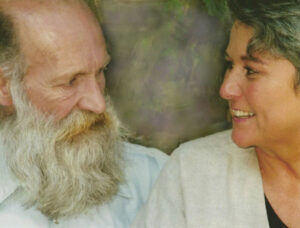 Slim met Katharina Kaffl in the fall of 1997 at his first workshop near Munich, Germany. In 2001 they were married. To Slim’s intuitive nature, Katharina brought her professional experience in business, finances, and practice as a healer. Before long, she also became a collaborator in his creative world of Light-Life Technology. On a higher level, Katharina and Slim’s marriage wed their commitment to each other with their dream of bringing harmony and healing to the world and all its people.

The techniques and technologies for personal and environmental health are now recognized and put into practice by a growing network of associate researchers and individuals worldwide who are keenly interested in the issues of health and environment.

Slim's Letter to Himself

Slim wrote this to himself as a “pep” letter. He left this as a reminder that we should all use. 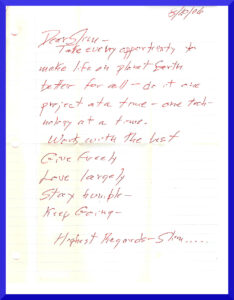