“In short, it’s been quite an adventure to come from my roots as a Colorado hillbilly kid to traveling the world by invitation and enjoying the company of some of the world’s most creative scientists who share a common world view somewhat contrary to the conventional academic humdrum…Nature is simple when seen through the eyes of your own personal observation.” – Slim Spurling 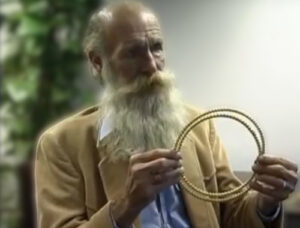 My father introduced me to Boyd Bushman. Boyd was a senior research scientist at Lockheed Martin in Dallas with about a hundred patents to his credit and a considerable background in physics and electronics. Boyd had the run of a laboratory in Dallas and did pretty much as he pleased as far as research goes.

I passed a set of rings along to him, and Boyd verified what Hans Becker had discovered in his laboratory. In a three-way conversation between Hans, Boyd, and me, Boyd confirmed Hans’s conclusions about the frequency range emanating from the tensor. Two independent laboratories, one official and the other private, now cross-confirmed the discoveries of the other regarding electrical, electronic, and energetic aspects of the ring.

Bill and I built our first caduceus rod in about twenty minutes using an iron rod and a discarded lamp cord.  We plugged it into a power source and began doing experiments on ordinary Denver tap water. Directing the caduceus beam through a jar of water overnight precipitated several milligrams of visible metals and minerals. These consisted mostly of quartz and feldspars with pannable metals trailing behind the lighter fractions.

Isolating these precipitates we found gold, silver, copper, zinc, and enough mercury to make the water hazardous to anyone drinking it. To eliminate the possibility that the precipitates were coming from the pipes, we filtered the water through several coffee filters before treating it with the caduceus coil.

Up to twelve jars of filtered tap water in a row could be treated by running the beam through all of them. Overnight, an equal amount of precipitate appeared in each jar. It appeared that the caduceus beam had the capacity to penetrate over a distance through glass and water. This experiment was repeated daily over a six month period with consistent results. We later found that the force coming out of the rod could penetrate a concrete wall and still have the same effect on the water, producing the same amount of precipitate in each container.

Another instrument that has been used to test the Light-Life® Tools is the biofeedback machine. I was given a high-quality biofeedback machine by a woman who no longer needed it. In Bob Dratch’s laboratory, we made some minor repairs and decided to check it out with the tools.

I hooked the electrodes from the machine up to his shoulder and his wrist. From a distance of four feet away Bob slowly approached me, holding a coil out toward my arm. When he got about two feet from me the buzzing signal of the meter on the machine began to indicate changes.

The sensitivity indicator on a biofeedback machine has a separate knob, and as the knob is turned, the sensitivity level with which it senses and records resistance or galvanic skin response increases. If there is any resistance, the user hears a high-pitched sound. Through relaxation techniques or meditation, one can learn how to lower resistance, requiring a higher level of sensitivity on the part of the machine to maintain the needle in the zero position or to maintain an audio signal.

As Bob got closer to me with the coil, the needle began to move off the dial and the sound signal was lost. I then began to turn the sensitivity settings to the highest levels. The closer Bob got to my arm with the coil, the more it became impossible to keep the machine in balance indicating any kind of resistance. By the time Bob was eight or nine inches away from me, there was absolutely no signal on the machine. It was almost as if I was a person with perfect conductivity. There was zero skin resistance.

We repeated the same test several times in the course of the afternoon, and found not only that the effect of the coil reduced the galvanic skin response, but that this effect would persist for quite a period of time, with the skin resistance remaining low.

The practice of biofeedback is a process of learning to relax, to keep the skin resistance low, and to reduce tension in the body. It is commonly used as a method to induce self-healing for certain conditions. Using the coil induces a relaxed condition and a high state of conductivity, rather than resistance, so that healing can occur. 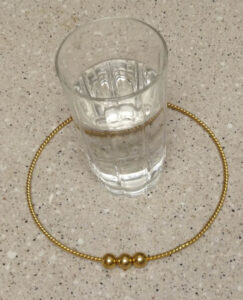 Ultraviolet frequencies are related to good health. The healthy body normally has mechanisms by which bio-photons of ultraviolet are produced. Consuming water that emits ultraviolet has a germicidal effect and inhibits the growth and life cycle of any disease-producing organisms that might be in the body. Inside the body, water enters the cellular and intercellular fluids and the bloodstream, providing a simple mechanism for the disruption of disease-producing organisms.

If we keep in mind that the body is approximately 70 percent water, it is easy to take this concept one step further. When a human being or an animal steps into the center of a ring and the ring is passed up and down the length of the body, the water in the body is charged, the same way a jug of water is charged, due to the tensor properties of the ring. It seems reasonable to speculate that this would engender a spontaneous emission of ultraviolet within the bodily tissue and create a bacteriostatic or virustatic state without its even touching the body.

What we have, then, is a noninvasive method for reducing bacterial or viral infections. The early experiments with the ring supported this conclusion when the positive field of the ring enhanced suppression of bacterial and fungal organisms in petri dishes. Bill and I were on the right track from the beginning, but the advance of the ring technology through the use of two wires produced a device with nothing but positive effects. The absence of negative energy combined with the effects of the 144 megahertz frequency seem to be the key components for beneficial treatment of water with the rings, whether in vivo or in vitro. These key components also give us a clue to the effectiveness of the ring in treating various conditions.

In 2001 Pete Jackson and Phil Callahan wanted to do some scientific tests with Slim’s rings. Pete Jackson does research into new technology for the Department of Defense and for industry as well. Phil Callahan is a well-known author of books on natural science. He writes about everything from the function of light, to the function of various natural chemicals or scent molecules from animals and plants, to paramagnetism in rocks and soils.

Phil has researched these things officially as an entomologist with the Department of Agriculture and unofficially for his own interest. He has spoken at the Acres USA Conference for the past twenty years. His recent book on the topic of paramagnetism and how it affects the growth of plants and agricultural crops delves into the ways in which paramagnetic substances or materials contribute to an increase in health or to a recovery in health.

My wife, Katharina, and I got together with Pete and Phil in December 2000 to discuss what the two of them had discovered about the rings. Their findings verified that the rings and the coils have a very high paramagnetic value. Paramagnetism can be measured by expensive meters found in the best-equipped laboratories. For reference, oxygen and certain granitic substances, like the pink Aswan granite that lines the King’s Chamber of the Great Pyramid, have a high paramagnetic value of 3000.

Phil invented a special detector for agricultural purposes. While it is not as accurate as some of the higher-cost instruments, it does provide correct and easily obtainable results, especially for testing agricultural soils. Highly paramagnetic soils are the best growing soils, because they have high oxygen content and the capacity to contain sufficient quantities of water.

Oxygen, having a paramagnetic value of 3000, by itself adds to the quality and fertility of a soil already high in paramagnetism. According to the work of Fritz-Albert Popp, given these conditions, the water in the soil emits light photons in the root zone, thereby contributing to reduction of the number of parasites in the soil that could adversely affect a plant.

Pete and Phil rated the paramagnetism of the rings at 18,000! This is six times the greatest value of the highest naturally paramagnetic substances known. Given this information, it is easy to understand why a ring placed around a sick house plant would cause it to revive, become green, and its leaves fill with water. Another example is given below in an early field report from a student of mine in Washington state. 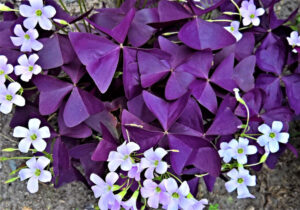 My student had a shamrock plant that was pretty much dead. There wasn’t a living shoot on it. For the sake of experiment, she watered the shamrock and placed a ring around it. Oddly enough, she positioned the ring at a forty-five degree angle, and perhaps this has some bearing on the result.

Within twenty-four hours, she was able to report to me that the plant had produced four-inch shoots and was bright and green with a full crop of leaves.

No one is claiming that the rings can resurrect the dead, but my files are filled with similar, equally amazing stories. One of my California students had placed a ring around a house plant to bring it back to life. The plant was perched on top of a dead palm tree log that served as a pedestal. Not only did the house plant flourish, the log sprouted leaves and put down roots! We’re talking about the resurrection of a dead stick of firewood here! Perhaps there was a living cell or spark in it somewhere, because it literally came back to life.

These two interesting and worthy examples from my archive of anecdotal reports are documented with photographs, so I have no hesitation about presenting this information. While full laboratory studies to support the archive and to explore the paramagnetism of the ring are a dream that I might never be able to afford, many chemical, agricultural, and biological advances are potentially available to anyone willing and able to make the effort.

Although there are many more of my early discoveries, what’s recorded here illustrates the degree of pioneering and the kind of concern that has gone into the study of the Light-Life. Tools. This research began with no clear sense of where it would lead. What guided these efforts had less to do with rational thought processes than it did with a willingness to remain open to all possibilities. Late nights in the lab watching white crows and following them takes courage. It is the spiritual warrior, not the scientist in me, who came upon this remarkable technology. 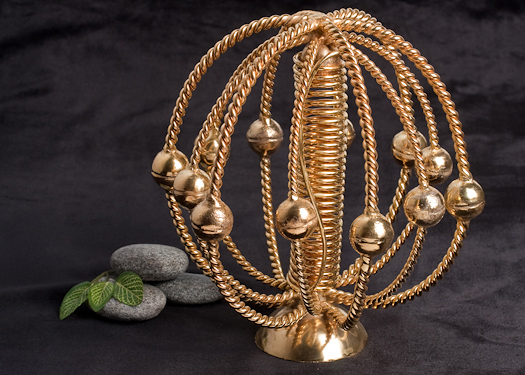 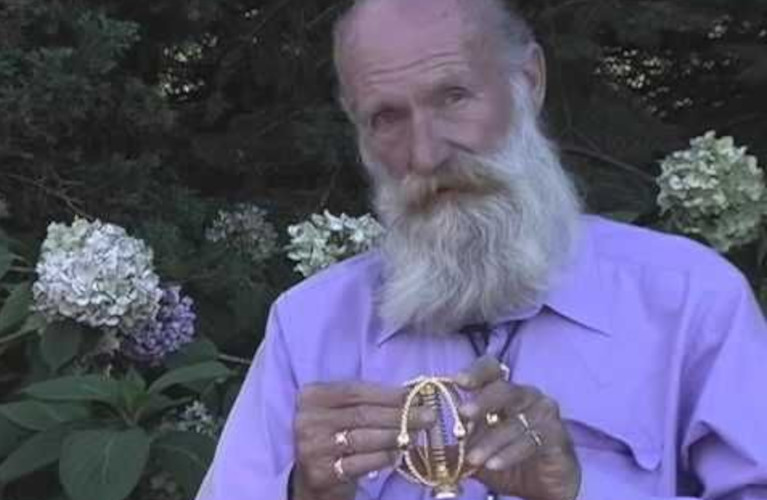 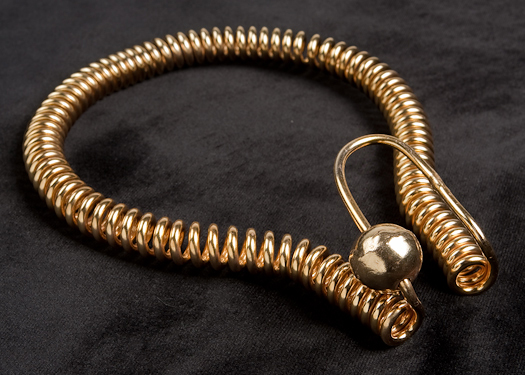